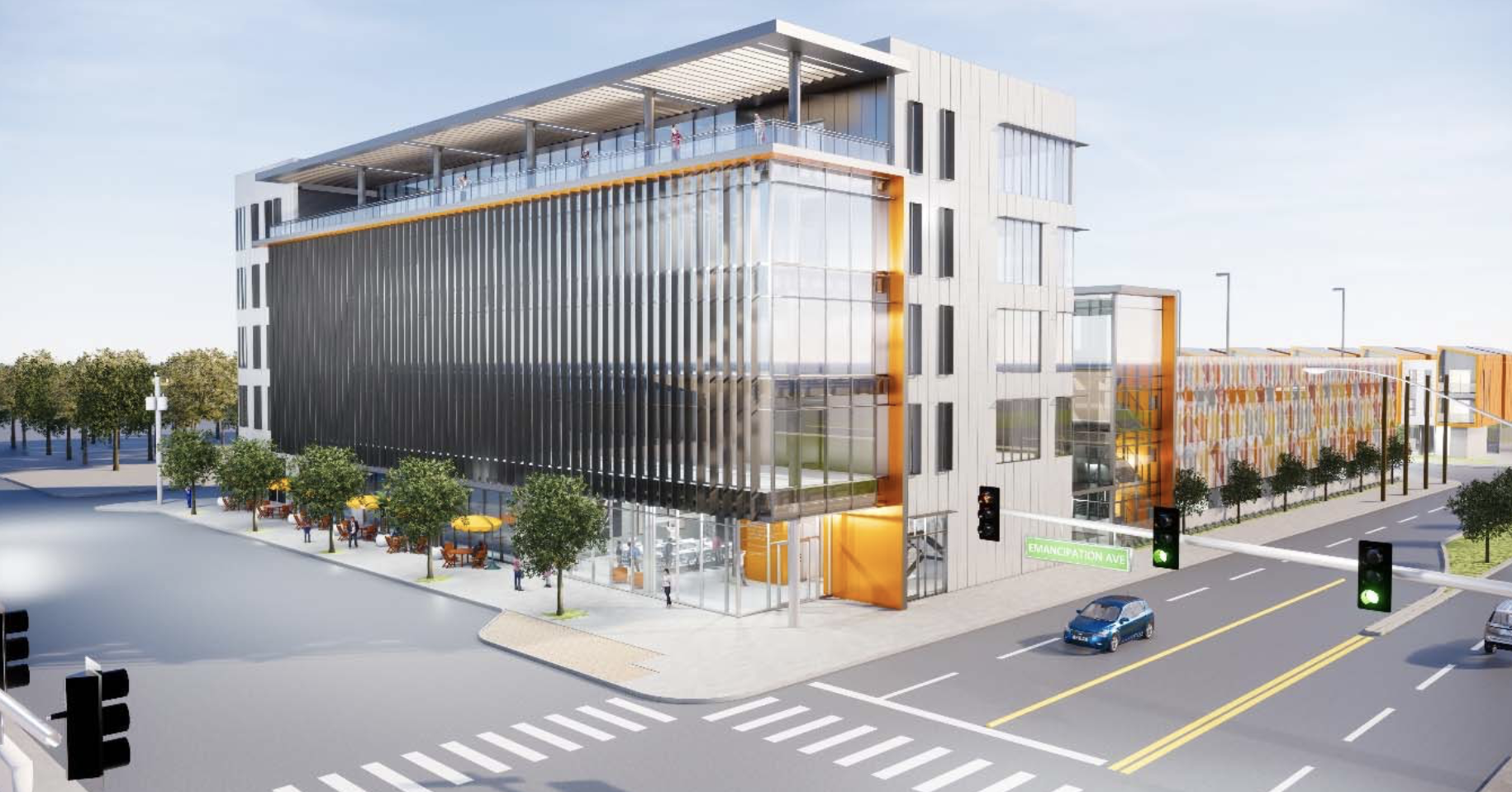 The City of Houston’s new affordable housing operations center, Emancipation Center, was first reported on back in 2016 in local real estate blog swamplot.com. The renderings, which can be found on the LAI Design Group website,  showed a glassy sphere to be built in the historic Third Ward.

At the time, it was called the Coleman Global Center or CGC, named after 30-year State Rep. Garnet Coleman who spearheaded the project. An estimate put the project at $23.8 million dollars, and it is being constructed by the Midtown Redevelopment Authority (MRA) and Tax Increment Reinvestment Zone #2, despite not being located in Midtown.

MRA, which owns about 3.5 million square feet of land in Third Ward, and TIRZ #2 are special purpose districts and are parallel organizations managed by the same nine board members.

With a board consisting of appointees by the City of Houston, Harris County, Houston Independent School District (HISD), and the Texas Legislature, the district collects local property taxes. Although this project on the surface seems as though it will help jump-start revitalization efforts for this historically underserved neighborhood, a closer examination of many critical aspects of the project raises concern.

Essentially it hopes to serve as an affordable housing think tank.

The first goal is “preserving” housing resources and is surprising because the MRA has become the beneficiary and recipient of numerous properties seized by Harris County for back taxes.  Through this process, we’ve seen many long-term residents pushed out of the Third Ward without an apparent effort to assist them.

In Texas, by law, 30 percent of TIRZ revenue must be spent on affordable housing. For the nearly 20 years of the MRA’s existence, these funds have been devoted primarily to the acquisition of land – under the guise of being used to create affordable housing.  Little housing has actually been built, but a vast holding of vacant land that could otherwise be on the market or privately owned has been banked through purchases made by MRA and the previously mentioned land seizures for back taxes.

The MRA allocates the remaining $20 million for a 48,000 square foot office building with ground floor retail dubbed “the operations center”. The official description for “the operations center” describes the purpose being to provide a “one-stop shop” for organizations that create, facilitate, finance, and help provide needed affordable housing in the city; however no detailed plans or any potential partner organizations are to be found on the agency’s website. An internal document estimating the net operating income says space will be leased at $2.49 per square foot, 50 percent more than the market value in the surrounding area. It is hard to believe that any active housing nonprofit will be able to afford rent so far above the market rate when other options are available.

According to the internal document, a majority of the funding will come from MRA (Midtown Redevelopment Authority) allocations and bond funds, again no further details of a bond can be found. MRA does not need voter approval for issuing bonds and this $23.3 million project is located outside of the boundaries of MRA, despite plenty of urgent infrastructure projects still unfunded within the district. Ultimately, it’s the taxpayers within the boundaries of MRA who are going to be on the hook for this project that isn’t even in their neighborhood.

Moreover, the timing of this large-scale taxpayer-funded commercial project is happening when the entire city, especially the Third Ward, is suffering a severe shortage of affordable housing. The Kinder Institute has been studying the impact of Hurricane Harvey on Houston’s affordable housing stock and finds it has been devastating.  Harvey was two years ago and nothing substantive has happened regarding housing development in the Third Ward.

Why not begin the first sizable project by adding needed housing units first and stabilize the current economic forces?  There seems little doubt this project will accelerate the already rapid displacement of longtime residents and, even worse, the market will inevitably raise the cost of remaining available land stifling opportunities for future affordable housing.

As envisioned, this project seems to merely continue a decade’s long pattern of ignoring the needs of intended beneficiaries while boosting egos and contract awards for people associated with the project. So, who are these people?

Would you be surprised to learn that the principals of the 3 major firms that are involved with this project, JOHN M. KIRKSEY – Kirksey Architecture, J Thomas Mercer – JTM Development, and G. Kent Collins – Centro development all donated to the same elected official in 2018? The same one who controls MRA – Rep. Coleman. Why would this project, which is only marginally about affordable housing, be used to glorify the person who has singlehandedly done the most to impede helping those in need of housing to stay in their neighborhood?

The secrecy and lack of information surrounding this project should worry every taxpayer in Houston and ultimately the citizens must hold every locally elected official to a high standard of ethics, responsibility, and transparency.  We must ensure public dollars are spent with utmost care and not be used to serve egos and hidden agendas. Instead of what we have, this first project should set the standard for future plans by addressing real needs and resolving the actual issues which have long plagued and been ignored in the historic Third Ward.