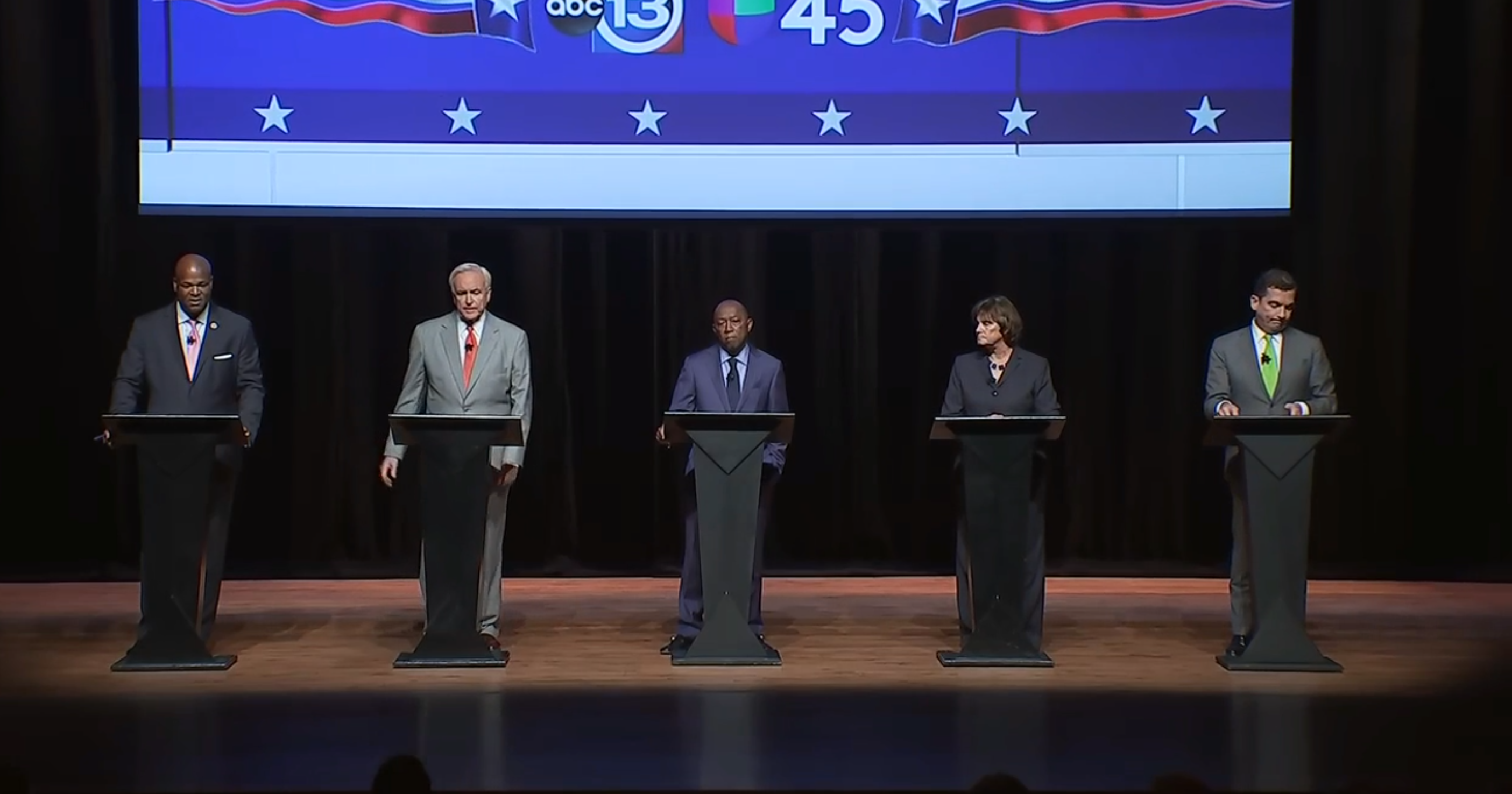 In the first televised debate of the 2019 Houston mayoral election cycle, the 5 leading candidates sparred over flooding, corruption, education, policing, and finances. While this is far from their first-time meeting on stage together, they all seemed to have an increased energy just weeks away from the election.

On crime, Mayor Sylvester Turner was the only to defend the current crime statistics, the others all pointed to increasing crime, but with different approaches to addressing the problem.

“When you ask the District Attorney’s office about their intake, they will tell you crime is up because their intakes are up,” said Lovell. She cited the increases in petty crime and poor police response times, if they respond at all, as making Houstonians feel unsafe.

Council Member Dwight Boykins called for replacing the police chief, “we will get a chief within the ranks of the Houston Police Department that is more focused on neighborhood issues and less focused on Hollywood and the TV camera,” referencing Chief Art Acevedo’s tendency to be an activist chief.

“Tomorrow, I’m going to put on my website the FBI statistics that show in 2017 we had 25,683 violent crimes and in 2015 we had 21,938 violent crimes, and if Sylvester or the Houston Chronicle has different FBI statistics then I’d invite you to put that up on the website,” said Bill King, pushing back against recent reports accusing him and challenger Tony Buzbee of exaggerating crime statistics.

Buzbee took his opportunity to take a shot at Turner who said “mistakes happen” when talking about the Harding Street Raid that left two innocent people and a dog dead. “Like a typical politicians, Mayor Turner wants to make this us against the police…there’s a systemic issue within the Houston Police Department that would allow that to happen,” he said, “when you say mistakes happen, that ain’t a mistake, you killed two people.”

Turner took issue with another comment Buzbee made calling into question the legitimacy of some minority subcontractors included in contracts in the minority and women-owned business program.

“I really didn’t want to go here, but since you’re talking about public corruption, in Galveston federal Judge Sam Kent. There was a federal judge that removed all 85 of your cases from Judge Kent because of corruption or conflicts,” he said, “all 85 of them. Now what was he doing for you and what were you doing for him? Anytime people start talking about corruption, take a look in the mirror, they may be talking about themselves.” Buzbee brushed off the attack by saying he was a first-year lawyer and that the campaign was desperate. Turner’s campaign immediately sent out a press release about the accusation.

While their positions on the issues discussed at the debate have been known for some time, it was the first time the group presented them in front of a wider audience and they all made sure to take the opportunity to stand out and stand apart.