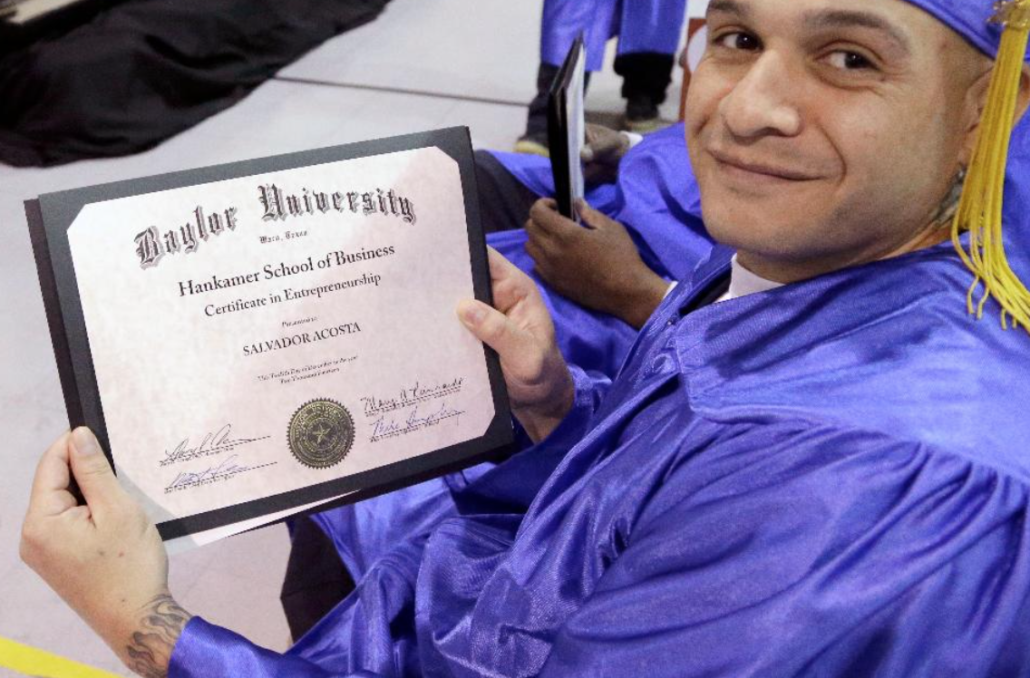 Entrepreneurial Prison Program Is An Example Of True Reform

The Prison Entrepreneurship Program was born over ten years ago in a mid-size private prison 60 miles northwest of Houston.

The Cleveland Correctional Facility–or Cleveland Unit–is a roughly 600-bed, men’s pre-release unit sitting on 40 acres. If not for the barbed wire and signage alerting you of its contents, the indistinguishable building would look like any other office.

But, inside is PEP, a revolutionary nonprofit program that’s goal is to give men–both young and old–whose past decisions have landed them in the position they’re in, a fresh start.

The offenders in the program are all within one to three years of release, but it requires more than a foreseeable release date to be accepted. To qualify, they must complete a 20-page application, pass three exams, and interview with PEP staff members.

When all is considered, PEP admits 500 inmates out of 10,000 eligible inmates giving the program a 5% acceptance rate, making it more selective than many Ivy League schools. While they accept inmates convicted of a wide range of offenses, they exclude sexual offenders.

The program starts off with a three-month character development portion in what is called the “Leadership Academy.” Throughout this portion the inmates learn and live PEP’s ten driving values while working individually to identify, and then remove, negative character traits and behaviors that impede a positive change.

Following the Leadership Academy is the Business Plan Competition. The competition is an intensive six-month “mini-MBA” program. Using college textbooks, Harvard and Stanford Business School Case studies, and classes taught by PEP staff, board members and business executives, each student crafts their own unique business plan that they hope to implement following release.

To build the plan they have to research logistics, industry and market research, and pitch the plan over 120 times in a Shark Tank-like format to groups of PEP volunteers. Courses also included in the program are: literacy, employment workshop, business etiquette, and toastmasters. So, unlike many other programs, these inmates are not just ushered through, they work tirelessly.

PEP pairs business executives, MBA students, entrepreneurs and other professionals with offenders so they have an opportunity to practice the skills that they’ve gained in the program. The partnership also allows direct feedback to improve their business plans.

Throughout the program volunteers can also serve as advisors to an individual competitor. Although the inmates aren’t allowed Internet access, a PEP coordinator partners willing volunteers with inmates whose plans align with the volunteer’s profession. During the program, volunteers correspond with the coordinator to provide the advisee with the most current market information.

At the conclusion of the program is the PEP graduation to honor the inmates who successfully complete the entire course. Graduates are awarded a Certificate of Entrepreneurship from the Baylor University Hankamer School of Business with their families and PEP volunteers there to celebrate with them.

PEP offers post-release assistance as well, in the form of eSchool (Entrepreneurship School), a program that allows the former inmates to continue their business education. If participants complete 16-20 workshops and assignments with passing grades, within seven months of their release they are eligible to get business financing through the program. There is also a mentoring program that partners male volunteers with inmates to ease their transition into the outside world.

Lastly, PEP has transition houses. Since most of the guys ended up in prison partly due to the people they surrounded themselves with, the transition houses provide a positive and encouraging environment upon release.

PEP’s low recidivism rate can be attributed to the program’s 100% employment rate for graduates within 90 days of release. While the national ex-offender unemployment rate is 50%, PEP says nearly 100% of its graduates are still employed a year after release. The average PEP graduate only goes 20 days from prison to their first paycheck.

Over 200 privately-owned businesses have been started by graduates of the program with six of those grossing over $1 million in annual revenue.

Most shocking of all of PEP’s accomplishments is that they operate without one cent of government funding. The program is funded entirely through generous donations, and those investing in it are certainly getting a significant return on their investment.

Every year nearly 600,000 men and women return to their communities from being incarcerated. Even after paying their debt to society, too many of them struggle to find housing and steady employment. Programs like PEP are invaluable because they not only benefit ex-offenders, but they also benefit the communities these men and women return to. Providing them with the professional skills necessary to succeed opens up unlimited possibilities for them to become contributing members of our communities.